December 19, 2017 By: Madelia Hickman Ring for Antiques and the Arts Weekly The sale realized $502,309 CDN and all 92 lots offered were sold, achieving the rare distinction of “white-glove” status.

With very few collections of this size available on the market, Waddington’s was not certain what the outcome would be, and the sale exceeded the expectations of Bill Kime, Waddington’s senior specialist in ceramics, glass and silver and one of its senior auctioneers.

The success of the sale underscores not only the strength of market for this specific collecting category but also Waddington’s sale strategy of selling with conservative estimates and without reserves. Kime said there had been extraordinary interest in the sale from private collectors, dealers and institutions but that more than half of the pieces were purchased by private collectors.

While there was international interest, most buyers were from the United Kingdom, United States and Canada. Kime said he was surprised at the amount of interest from Canadian buyers and was pleased that several pieces, including a few of the “Wally Birds,” were purchased by Canadian buyers.

The sale got off to a promising start with the first lot, a face jug selling for $9,000, six times its low estimate. The top-selling lot was a stoneware bird tobacco jar, by Robert Wallace Martin, dated 1907, approximately 8 inches tall. Estimated at $15/20,000, it more than tripled its low estimate when it sold for $48,000. Kime thinks it could have set a record price for a late Martinware bird due to its distinctive and unusual glazed decoration. According to Kime, Martin would go to London’s Old Bailey courthouse and sketch the birds there, giving them exaggerated features, and they would become the “Wally Birds” so alluring to collectors today. Many later birds were made as forms with movable heads; this ability to further animate the birds adds to their appeal. Regardless of size, “Wally Birds” did well: two 4-inch small birds each doubled their low estimates, while a 2-inch miniature bird brought three times its low estimate.

Working in late Victorian-era London, the Martin Brothers are considered to have been pioneers in transforming decorative arts from the formalism of the Victorian era to a more whimsical and naturalistic style that foreshadowed studio pottery of the Art Nouveau movement. Kime attributes the appeal of Martinware to their whimsical and eccentric aesthetic that, while they led the way for other Studio potters, was purely their own.

Eclectic to the core, the Martin Brothers’ work bears the influence of art and architecture from the Middle Ages and Gothic periods, but much of their unique pottery exists in a category of its own. While holding on to the eclectic characteristics of Victorian times, many of their sculptures took on exaggerated forms and personalities. Among recognizable Martinware forms are their sculpted face jugs, Gothic stoneware vases and spoon warmers resembling monsters, mythical creatures, classical figures and the use of sea life motifs and other fantasy-inspired figures. A fantastical beast-form spoon warmer jug more than tripled its low estimate when it sold for $19,200 and other forms outperformed their estimates as well.

Kime said that the collection was relatively unknown, belonging to a couple in the Vancouver Islands who began by collecting Moorcroft pottery. The couple were advised by scholar and dealer Richard Dennis and traveled to London in 1978. Staying in an apartment over his studio, the wife of the couple discovered the collection of Martinware he was assembling. The couple would continue to seek guidance from Dennis, as well as Vancouver gallery owners Neil MacMillan and Dan Perrin, who are recognized as “market makers” for Martinware. According to Kime, the collection had no obvious gaps and was extremely balanced, including works by not just the four Martin brothers but also the various workmen who were known to have worked in their studio. He concluded his comments by saying the sale was “the most fun he’d ever had in 40 years.”

Our Appraisal Tour Continues in Winnipeg 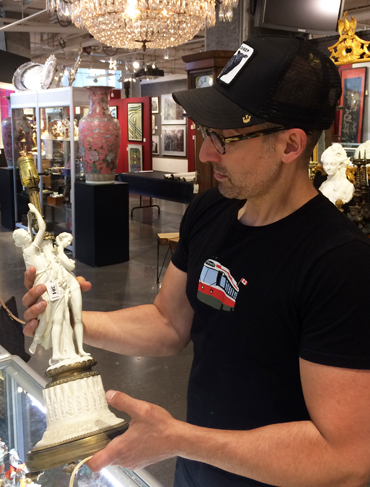 William (Bill) Kime is a Senior Specialist in the Decorative Arts department at Waddington’s.  Educated in England, including further studies at Sotheby’s (London) and at the Victoria & Albert Museum, London, Bill joined Waddington’s in 1975.

Now, with over 45 years’ experience and a wealth of accumulated knowledge in his field, Bill enjoys a respected reputation as one of North America’s foremost experts in 19th and 20th century decorative arts.